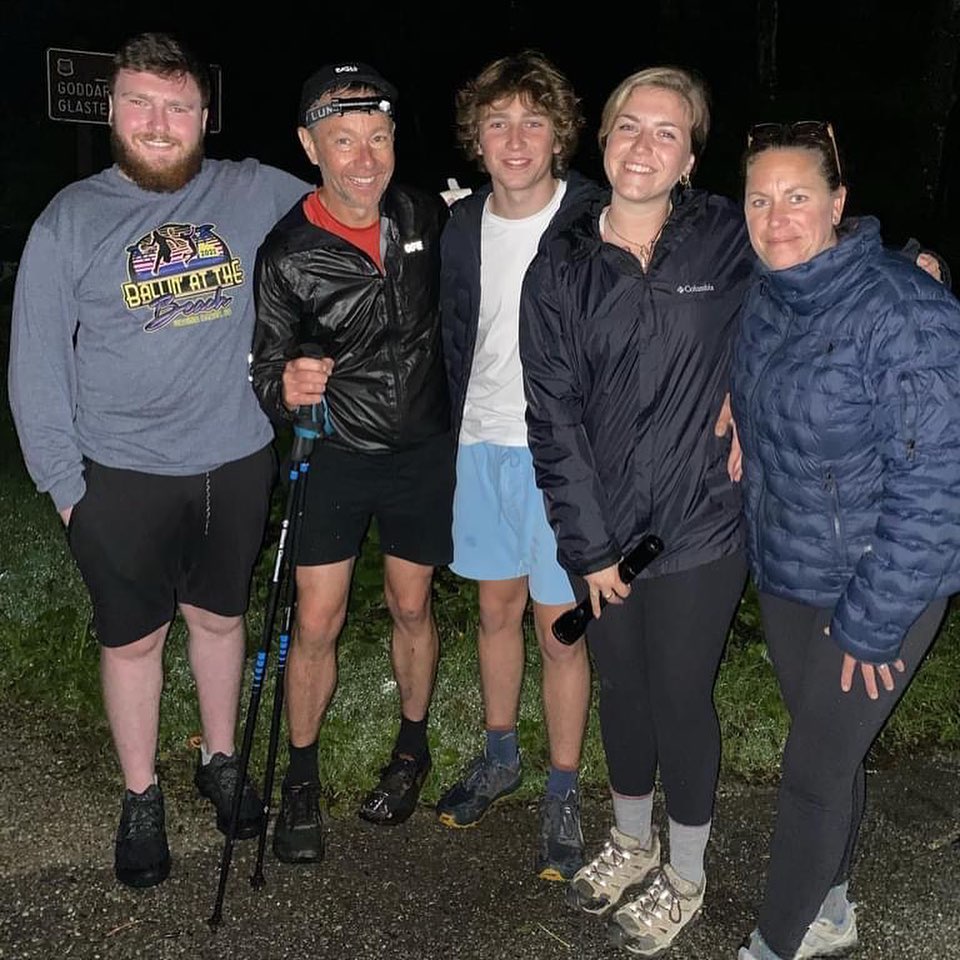 Vermont’s Long Trail is a 273-mile gnarly path along the craggy spine of the Green Mountains, stretching from the Canadian border to the Massachusetts state line.

On average it takes hikers 19 days to traverse the entire technical trail ofridges, ruts and roots. Then there are “ultra-marathoners” like Jeremy Howard, of Little Compton, who will try running its length in just under six days, the fastest known time.

“The term most-often used is fastpacking,” said Howard on Sunday, his feet still swollen and blistered from his recent attempt. “By no means is anyone running up those hills.”

Howard, who is 49 and co-founder of an international sports equipment company, set off to break the Long Trail hiking record on the morning of Thursday, June 16, inspired by the challenge and a cause: to raise money and awareness for The Play Brigade, a Boston-based nonprofit which promotes recreational opportunities for people with disabilities.

Even under the best conditions, Howard, with a dozen marathons and several 100-mile races under his feet, anticipated extreme physical and mental distress: 4 or less hours of sleep a day while burning twice as many calories as he took in, and filtering his own water ? all while his body’s survival mechanisms screamed for him to stop.

Howard began the challenge carrying a 22-pound backpack of supplies, 80% of which was food. It also included a small insulted foam pad ? cut down to just 4-feet long and 18-inches wide to keep his torso warm while sleeping ? and a toothbrush with its handled shortened to shave off those few ounces of carrying weight.

This would be a completely unassisted attempt to break the record of five days, 23 hours, 48 minutes set by Jeff Garmire two summers ago. The only external support afforded Howard was a name, Harper Oates, written on the brim of his favorite cap. The 9-year-old girl from Brookline lives with a spinal injury. Her mother, Dawn Oates, founded The Play Brigade.

“Whenever things get tough, I know [her signature] is up there,” Howard said. “It is something to allow your mental attention to focus on.”

If Howard was going to break the record, he calculated he’d be moving about 20 hours a day. But eight hours in on the first day, his foot snagged a root, ripping a tear in the front of the shoe. He tried to repair it with surgical tape but with so much water and mud on the trail, it failed to adhere. He ended up using a piece of parachute chord off his bag tosew three stitches into the shoe to hold it together.

Conditions only worsened: 90-degree days in the mountain valleys, 40-degree nights; 30 hours of continuous rain at one point and dangerously slippery rocks. As exhaustion, sleep deprivation, and foot pain settled in, so too did periods of delirium. Hallucinations on the side of the trail became normal.

“You just become aware you are slowly losing your mental capacity. I just looked down at the ground and thought: ‘how can I plant my foot on the next rock with the least amount of pain?'” Meanwhile, Howard lost his reading glasses, making it difficult to read his GPS. Then he lost his paper map he was using to mark his progress.

The race ended for Howard on Tuesday, June 22, at about 10:30 p.m., after a period of weaving along the wet trail on feet swollen and shooting with pain. “The potential of this becoming life threatening became a little bit of a reality,” he said.

From a ridge on Glastenbury Mountain, overlooking Route 9, Howard managed to get a cell signal and called his wife, who was down below, expecting to meet him at the end of the trail when he broke the record.

Howard said he was 14.6 miles from finishing, and on pace to break the record, had conditions not worked against him.

He’s content with his effort and happy to have raised more than $10,000 for The Play Brigade; some volunteers have offered to finish hiking the rest of the trail for him with more donations expected.

He hopes to try breaking the record again sometime.

But not before a planned 100-mile race in Colorado in four weeks.

Tom Mooney can be reached at tmooney@providencejournal.com